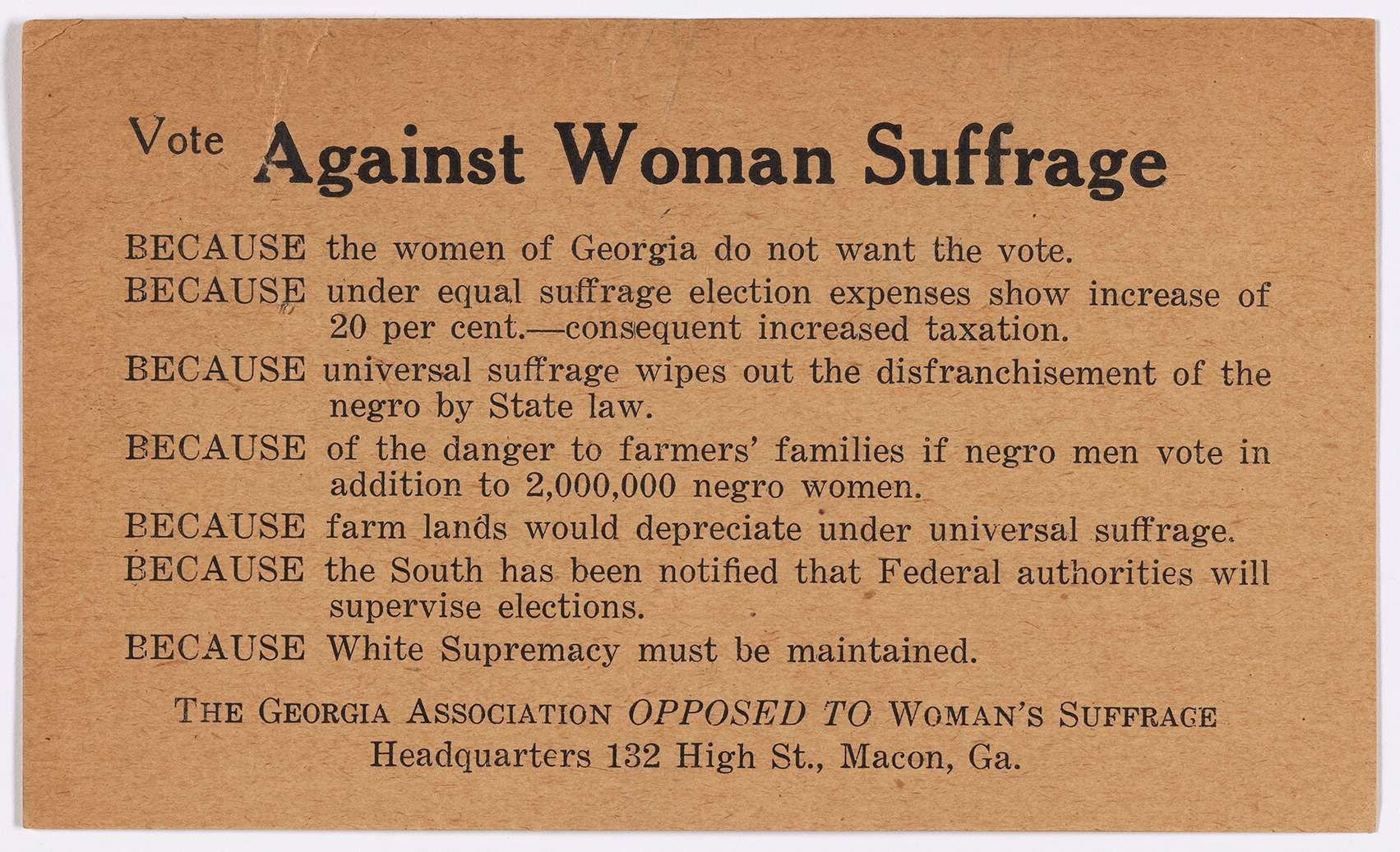 Anti Suffragism was a political movement that had both men and women against the women’s suffrage movement. The movement was classically conservative that wanted to maintain the status quo for women. ‘Domestic Feminism’ was a main anti- suffrage idea, explaining that women had the right to complete freedom within their homes.

Many of the anti-suffragist women in states where the vote was won, still voted. Elizabeth Howell Smith complained of the pressure it put on her life, and the lives of other women in the West, stating that, "... the right of suffrage has been thrust on me,...". In California, local anti-suffragists encouraged like-minded women to vote, regardless of their stance on the vote. Many Californian women saw it as un-democratic and an uneccesary burden on women. Women and children were already protected in the state, with only men voting.

Some of the 'infamous' women were:

Amey Webb Wheeler - VP of the Northern California Association Opposed to Woman Suffrage, and the wife of Benjamine Ide Wheeler, the 8th president of the University of California 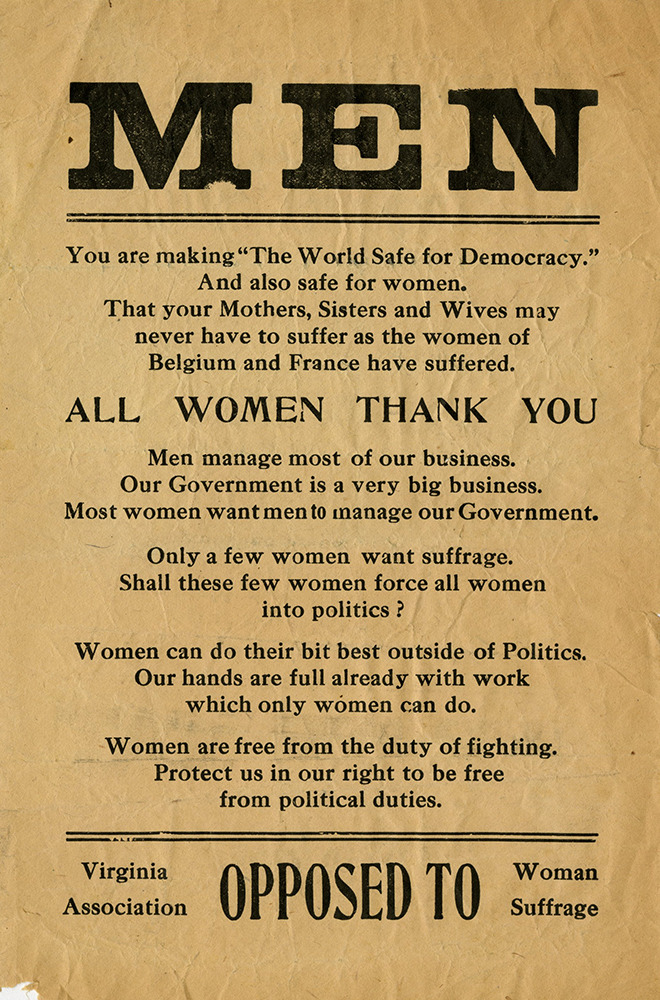 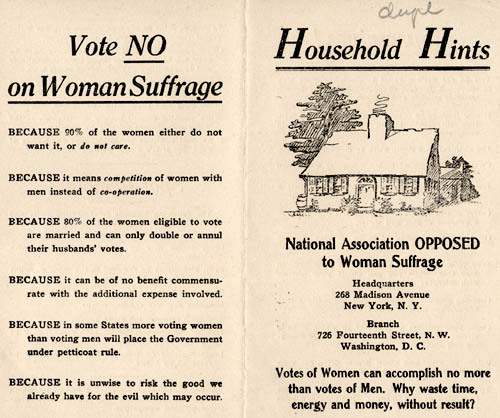 In california, and eventually nationally, one of the main objectors of the movement was their very own State Senator from 1902-1906 and 1910-1914, John Bunyan Sanford. He objected to the proposal that the state constitution should be amended to allow women the right to vote, but his arguments were rejected and women’s suffrage was granted in 1911.

Some of his main arguments (and most insane things he said ) were:

“The mother’s influence is needed in the home. She can do little good by gadding the streets and neglecting her children. Let her teach her daughters that modesty, patience, and gentleness are the charms of a woman.”

“The men are able to run the government and take care of the women. Do women have to vote in order to receive the protection of man?”

He called women’s suffrage a “disease,” “political hysteria” and a “backward step in the progress of civilization.”

He wrote that those who advocated for women’s suffrage were “the mannish female politician and the little effeminate, sissy man, and the woman who is dissatisfied with her lot and sorry that she was born a woman.” 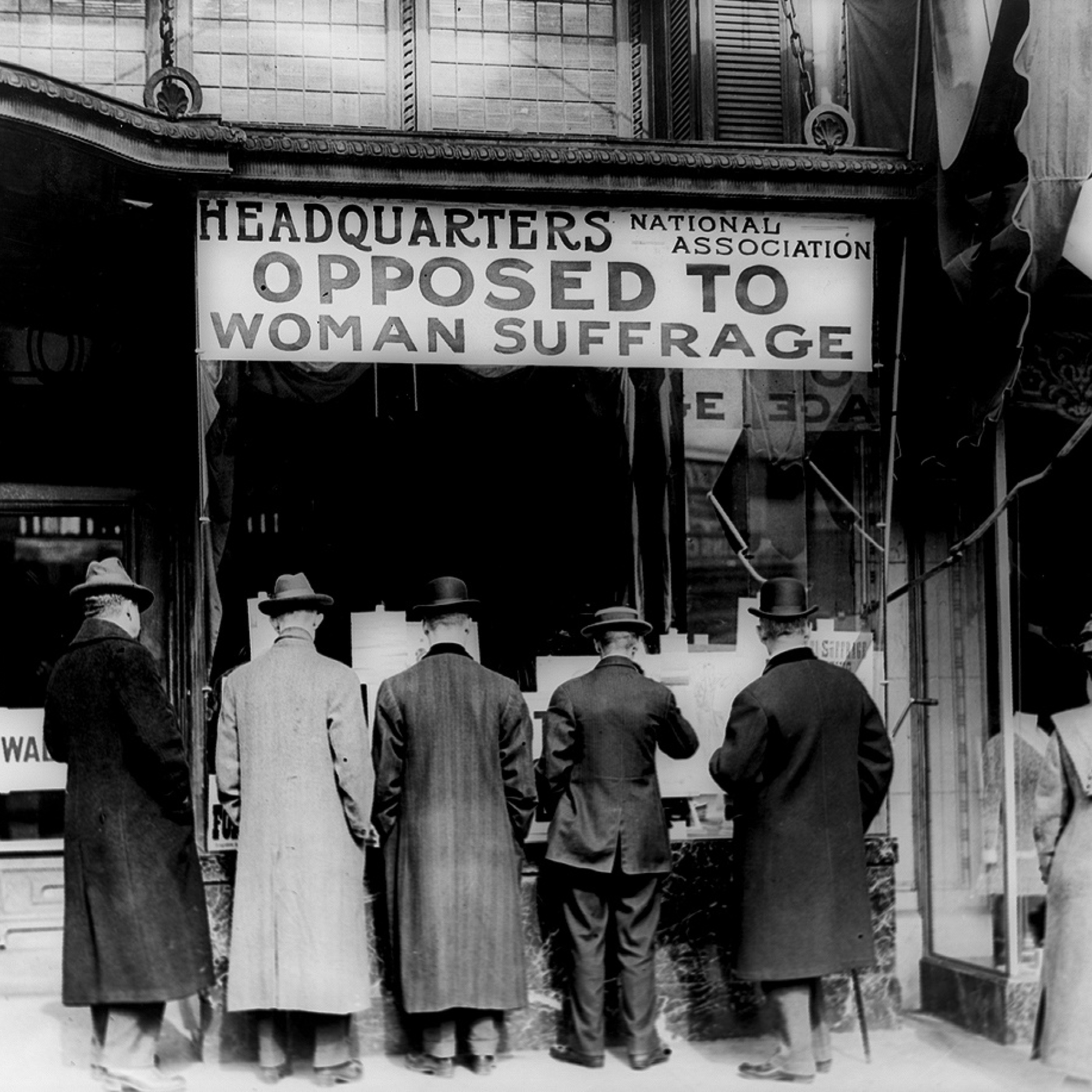 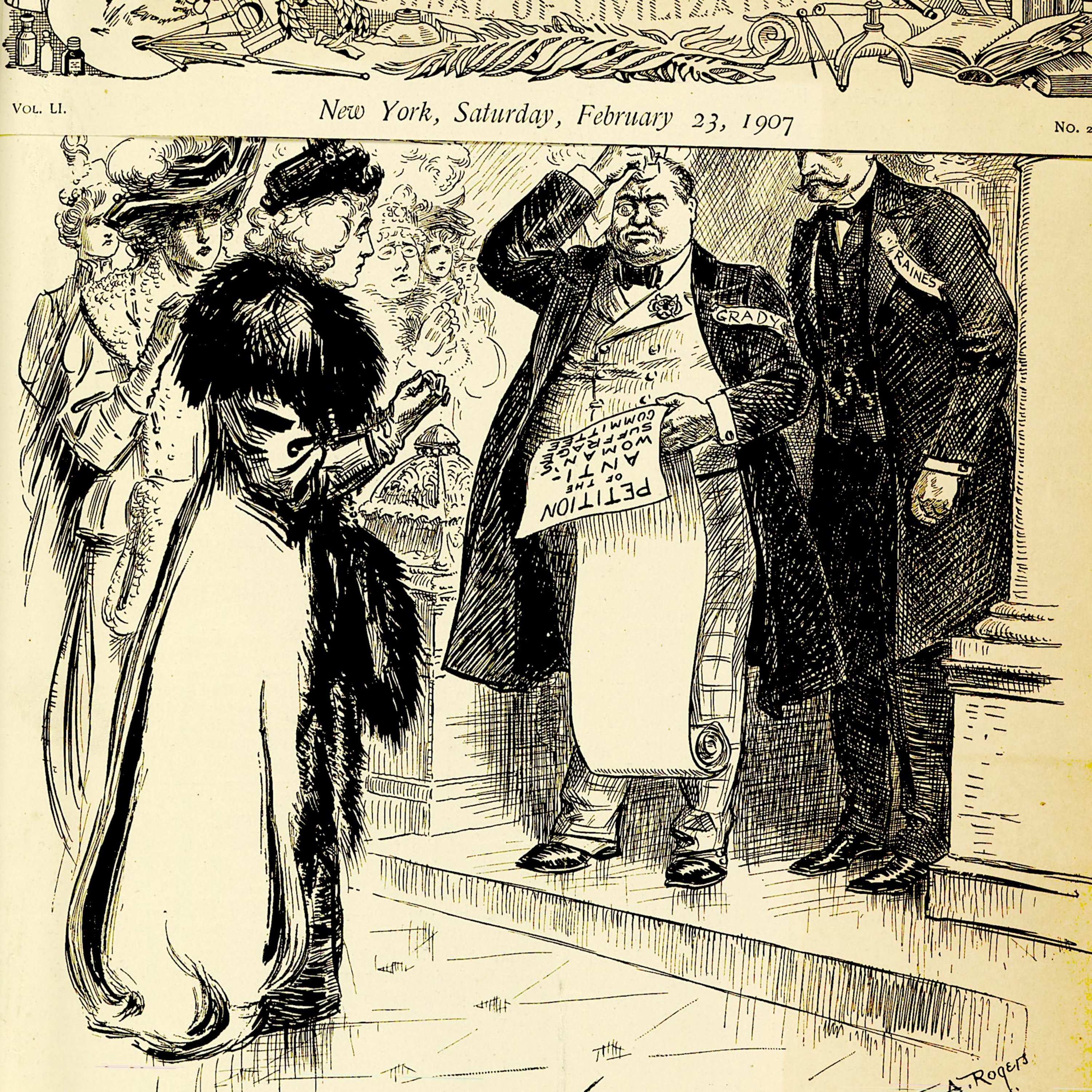 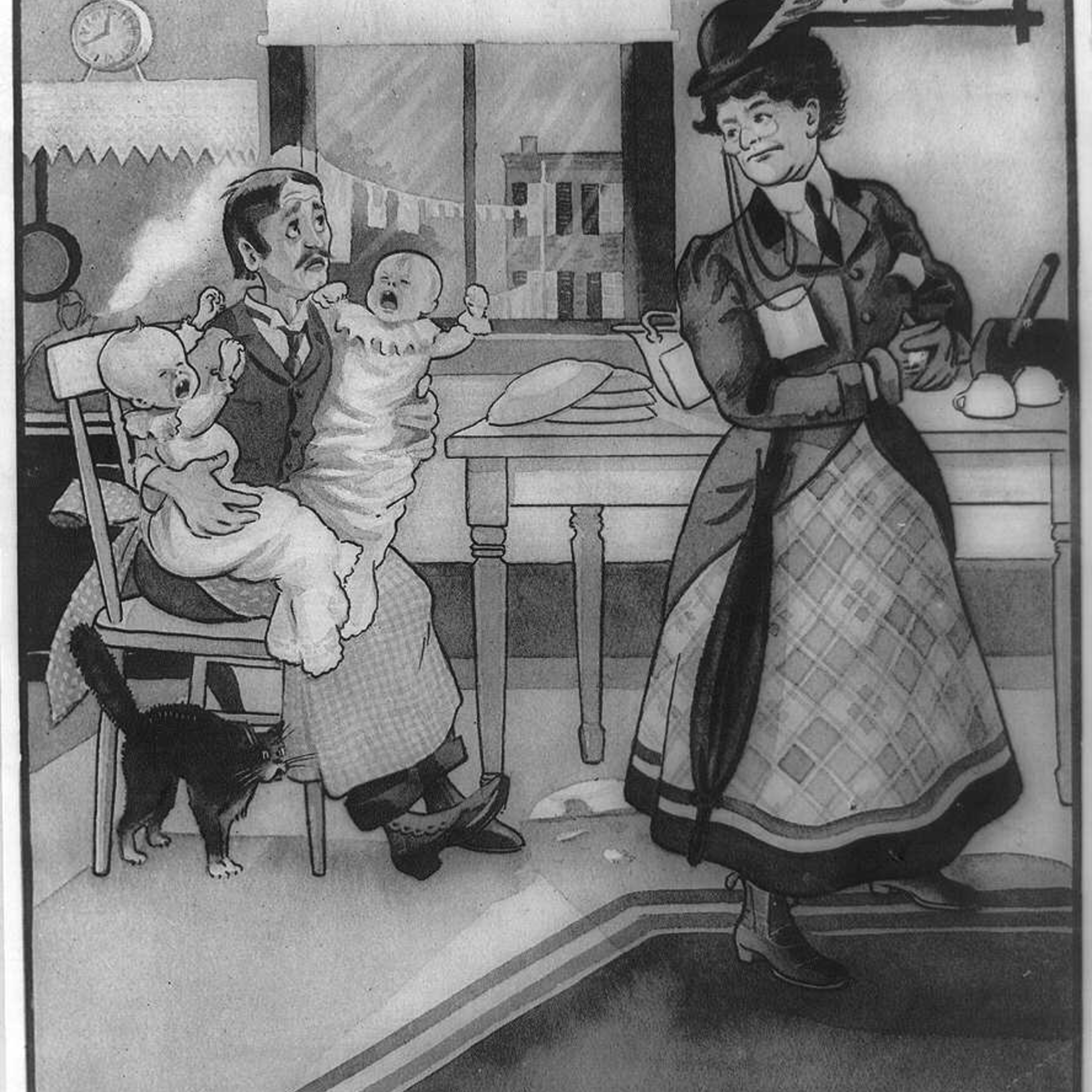 The movement was started by men who were opposed to women in politics. Eventually, women joined the fight, hoping to maintain the lifestyle that they had found so pleasant and ‘freeing’. Eventually the National Association Opposed to Woman Suffrage (NAOWS) was created in an attempt to stop the suffrage movement. Operating in 25 states, NAOWS gained popularity among the ‘antis’ from 1912-1916.

The main reasons for opposing women's suffrage were centered around fear of change. Many feared that allowing women to vote would change the family institution. Women were not focused on their ‘highest duties’ of motherhood and the responsibilities of a family. Some opposition was based in religion, believing that women should be focused on the children, the kitchen, and church, coming from a German saying, "Kinder, Küche, Kirche”. Some anti suffragists didn’t want the vote because of how it didn’t follow traditional gender norms, fearing the ‘end of true womanhood’.

Many also felt as though women lacked the knowledge and the education to handle something as ‘complex’ as voting. It was not seen as a right, but as a ‘duty’ and women were given other duties and responsibilities that would effect their ability to vote.

The Fear of Temperance

Others feared the Temperance movement. Temperance began in the early 1800s as a way to help limit drinking, it combined a concern for general social ills with religious ideals, and practical health considerations. It appealed to middle class reformers and women in particular. The Women’s Christian Temperance Union was founded in 1873 and became a national social reform and lobbying organization. It tried to focus on alcohol reform, but eventually those involved became too ‘radical’ and many in the United States objected to their ideas. It had done some positive things, mainly it trained women in important practical skills for the changing world. It taught them leadership, public speaking, and political thinking. It played a large role in the Women’s Suffrage Movement and the passing of the 19th amendment.

← Timeline of Womens Suffrage in California
Victory! →
Pushing Through